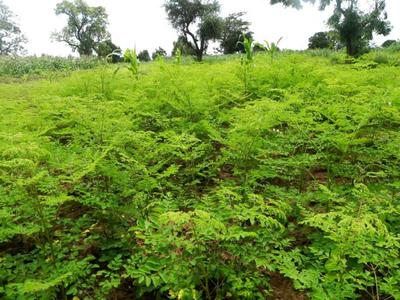 Part 1 - Grow Your Own Superfood by following these planting and care instructions for your Moringa seeds and trees. This article concerns intensive leaf production and cultivation on a test farm in the North of Senegal.

Following the success of a pilot project which demonstrated the positive effects of Moringa leaf powder in preventing malnutrition among children and among women during pregnancy and lactation in the Casamance region of Senegal (Fuglie, 2001), the NGO Church World Service (CWS) worked with governmental agencies in The Gambia to design a more elaborate Moringa-based malnutrition prevention program.

To meet the needs of this program, a large quantity of Moringa leaf powder must be available. In Senegal, the production of leaf powder in the Casamance region was deemed insufficient in quantity and not consistent in quality – the trees are too dispersed and there was no control in the methods of leaf harvest, of leaf powder preparation and of leaf powder storage.

It was therefore deemed necessary to development an intensive production capacity.

At the present time and since September 2001, a Moringa farm is under cultivation at a site located 300 kilometers north of Dakar near the village of Ndimb, region of Keur Momar Sarr, department of Louga.

This site was selected because CWS has been involved in development programs in this region for twenty years and has very good relations with the local population and the Keur Momar Sarr-based organization ASREAD (Senegalese Association for Research and Aid for Development).

A piece of land situated 200 meters from an irrigation canal – drawing water from the Guiers Lake – was given to us by the people of Ndimb (a village located 4 km from the 4 km-long canal).

A soil analysis showed that the land was free of salt and had a satisfactory pH balance (between 7 and 8).

In order to determine the optimal spacing of the Moringa trees, so as to obtain the highest possible quantity of green matter, we analyzed a study comparing different Moringa plots conducted in Nicaragua in 1999 by Nikolas Foidl, an Austrian researcher who was visited by Lowell Fuglie in mid-2000.

Taking into account various factors influencing the overall efficiency such as the cost of seed, the loss of some plants after the first harvest (caused by insufficient light), and the cost of soil preparation, he concluded that for the production of green matter, the optimal planting density in soil that is sandy, fertile and well-drained is 10 x 10 cm or one million plants per hectare.

Selection of planting density depends on the production objectives. For example, if the objective is production of green fodder with a maximum of protein and a minimum of lignin content, then harvesting should be done every 33 to 40 days.

It the objective is to produce a maximum of lignocellulose fibers for paper pulp, then harvesting would ideally be done after six to eight months of growth. This amount of time would enable the trunk of the plant to reach the desired diameter and reduce the production of small branches, leaves and bark, thereby maximizing the production of lignified wood.

The steps for the development of the plantation plot were as follows:


The only mechanized work used for the plot preparation was the deep plowing by a rented tractor. Everything else was done by hand: digging of ditches for water pipe installation, plot land clearing, manure collection and application, irrigation system installation, seeding, weeding, etc.

To support the farm operations there was construction of a leaf-drying room of 216 square meters adjoined by a 140 m2 shelter for working and rooms for storage of tools and other small materials.

The drying room has a concrete floor to facilitate cleaning and is for the most part closed. Four windows permit air to circulate in the room, but are kept open just half way so as to block the entrance of sunlight which can destroy vitamin A.

The shelves for drying the leaves are designed simple enough so that workers can easily assemble them with a hammer, nails and tacks. The shelf trays made of mosquito netting (to facilitate movement of air) tacked to a 1m x 1m wooden frame.

These trays are supported in levels held up by wooden posts hailed together to create a free-standing shelving unit 2 meters high, 1 meter wide and 4 meters long with a total of eight levels. The light weight of the trays and simple drying method permit easy manipulation of the leaves.

Finding the quantity and type of fertilizer needed to maintain a good growth of the Moringa plants was surely the most difficult step since no literature on this specific topic could be found.

Soil analysis showed us that we were dealing with ground composed of more than 95% sand. After several trials, we found the best performing results with water soluble fertilizer 21/7/20 (NPK), enriched with minerals and trace elements, which was purchased in Dakar.

This fertilizer was applied through the feeding tank attached to the drip irrigation system. This application method permits the fertilizer to be evenly applied throughout the plantation. The amount of fertilizer applied to the hectare was between 32 and 48 kg per week, depending on the visible condition of the plants.

During the past two weeks, we reduced application rates by half (to 16 kg per week) and the plantation condition seems correct. In addition to NPK fertilizer, we are applying urea at the rate of 8 kg to the hectare every two weeks.

Quantity of water used according to season:

However, even watering the plantation in a regular and systematic manner throughout the year, the yields of green matter vary significantly between the dry season and the rainy season.

In the north of Senegal, after nearly two years of production, the yields are much lower than those cited by Mr. Foidl in Nicaragua. We are able to produce on average 100 kg of dried leaf powder per week, or five tons per year.

It requires 8 kg of fresh leaves (with stems removed) to produce one kg of dried leaves.

During the rainy season of 2002, several attacks by leaf-eating caterpillars (unidentified) completely devastated the plantation. We applied the insecticide DECIS and completely cut down all the plants.

Fortunately, the trees very vigorously recovered because the growth and resistance of this tree are exceptional. During the 2003 rainy season, we had to apply insecticides on a regular basis since attacks were very frequent. This year there was no significant plant loss.

The farm hectare was divided into 8 plots so as to facilitate transport and schedules for irrigation, harvest and maintenance. Fruit trees (citrus and mango) have been planted between the plots. The farm workers also cultivate onions, peppers and manioc between the plots (but not tomato, since this requires too much labor). The onion harvest has been excellent.

Harvesting the 8 plots is done one after the other, according to the schedule, with each plot harvested every two months during the year (although in Nicaragua 9 harvests per year are possible).

We wait until the plants reach a height of 1.2 meters. The laborers use a small hand scythe to cut the plants down to a height of about 20 cm above ground.

At the beginning, we waited until the plants reached a height of up to 2 meters before harvesting them, but we found that this approach led to too much loss: the lower trunk of the trees lost many leaves and their large diameter made cutting difficult.

After the cutting, 5 days later, the re-growth of branches is already visible. With our approach, six harvests per year are obtainable.

Join in and write your own page! It's easy to do. How? Simply click here to return to Moringa Natural Products.