What is a Genetically Modified Organism, who should care about it and what does it have to do with a cosmetic site? 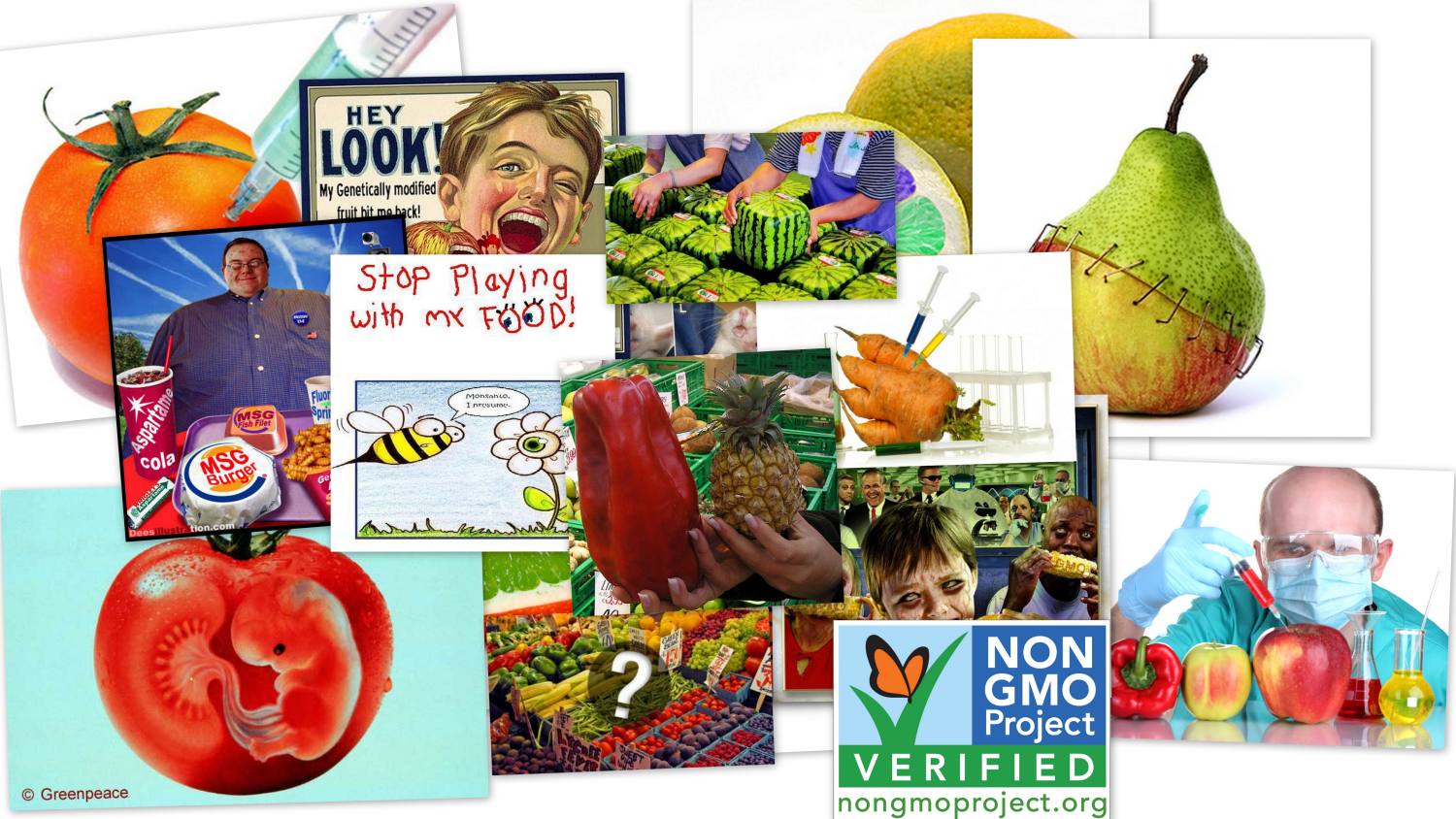 From the cosmetic perspective, plants are a significant contributor to natural cosmetics. Fruits, herbs, trees and seeds are only a few examples of the many parts of a plant used in natural cosmetics, for thousands of years now.

Have a quick browse at some natural cosmetic recipes to see for yourself.

Genetically modified organisms have been around for a few decades already and has been quietly moving into our lives without much attention. Bacteria's, yeasts, insects, plants, fish and mammals have all been genetically modified.

Here are some less controversial examples :

This engineering principle of playing in unknown territory has been traditionally limited to scientific research and producing goods, and only in the last few years has the industry realised the financial benefits of using GMO in food production.

Because of this "new product" in the GMO portfolio, it has become the centre of a lot of controversy and it is important to have a clear understanding of both sides so that you can make an educated decision and get on with your life without having to be sucked into this controversy.

Most humans feel that food, like air, is a basic human right, as are the genes in your body. We have a moral attachment to these rights and feel threatened when companies and Governments start to take away or regulate or charge or restrict these rights.

This is different to producing "blue" roses and glofish as we see the results of this genetically modified technology as new products, the same way we view new cellphones as products (whether either of these products are produced using sustainable resources is not for today).

While "blue" roses and glofish may be viewed as progress for mankind, controlling and changing essential lifesource pillars, such as air and food, does not fit well with many of us.

None of these are seen by the public as a moral contribution of our rights being used and modified for the well-being of mankind but rather
a twisted and morally bankrupt hijack of our rights for the benefit of control and profit.

These rights belong equally to every single human being on this planet and this includes any living creature that is unable to defend their rights. Humans have the moral responsibility to preserve their natural biological integrity because humans, as their custodians, are at the apex of the living cell pyramid.

We are already failing our moral custodian duties and have been for some decades. There is no other known time in the history of this planet (other than natural disasters) that there have been so many living organism extinctions in such a short period of time.

The public is concerned and the reasons are obvious

Our path of destruction is so bad that global scientists are continuously petitioning Governments, policy makers, big business and consumers.

If no dramatic changes are done starting now, then within the next 37 years (by 2050) so much harm will be done to our ecological life support systems that human quality of life will be degraded.

Pesticides, herbicides and chemical fertilisers are significant biosphere polluters and are at the highest levels ever seen by humans.

Many of us reading this will still be around in 37 years time - are we going to wait and watch while the world burns and then hand it over to our kids while we move on to happier hunting grounds?

Here is an example of a strawberry and a fish. 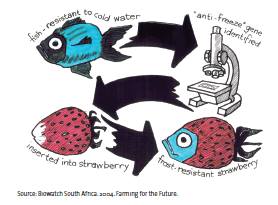 In this illustration, the fish is identified to have a very high tolerance to cold water. Scientists examine the fish to find out why it has this tolerance.

Let's say that they identify a unique characteristic (enzyme / protein / etc) that causes the brain to largely shut itself down so that blood flow (that is now cold due to the environment) to the brain is considerably reduced. This feature protects the brain from a rapid reduction in temperature thereby preventing brain damage.

The scientists realise that if they can extract this part of the gene from the fish and add it to the gene of the strawberry, when it gets cold, the gene will activate a protein that will help the strawberry survive frost and similar climatic conditions.

On paper, this sounds fantastic. More strawberries can be grown because you can now grow it in colder climates. Strawberries will become cheaper because more farmers are growing them. More farmers are working which means less unemployment. The list is as long as you want it to be.

Where is the problem?

The problem is that humans cannot eat anything in this world and what we do eat has been tried and tested for thousands of years through natural process and selection. Our food and ourselves have learned to work with each other and we get on just fine at the moment. 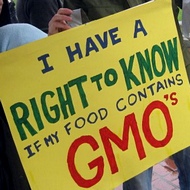 This genetically modified strawberry is now something completely new to the world. It may look like a strawberry but it is not the same as natures original version (recipe / gene)

If we now eat this genetically modified strawberry, there are obviously some unknowns concerning the "anti freeze" protein that now exists in the strawberry. To illustrate our example, here are a few:

Without getting too scientific, an easy way to form a reasonable opinion is to consider that if it could be done, then why has nature not done it?

The answer is ... nature cannot do it even if she wanted to. Nature simply does not have the tools to combine fish and strawberry genes or fish and tomato genes or the genes of any other 2 or more species that are not the same. 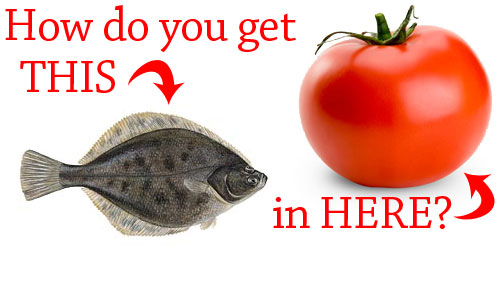 Only mankind can do this

This video provides a great view of how GMO seeds are made and how they are made to withstand herbicides. It's about 7 minutes long and is worth a watch.

With extensive, independent, peer reviewed and global testing, scientists can answer many of these GMO unknowns with considerable accuracy.

Unfortunately, the sad and real truth is that right now, many of these answers are the results of biased and secretive 90 day tests with a few lab rats done in-house by the GMO companies themselves.

GMO is in the hands of a few

But we do not need genetically modified technology to be controlled by morally bankrupt corporations and civil servants.

There is no doubt that this technology has the power to elevate mankind to new levels of development. But the power of the technology and the corporations that presently control it could very well be its downfall in terms of public support and opinion.

It is too powerful not to share and there is no way that we will allow Governments and Companies to own what was given to us by Nature.

What can you do

If you support the present situation, then keep on buying GMO products as you have been - it is your spending that has got them this far.

If you don't support the present situation, then stop buying anything GMO. Right now, money is the fundamental principle driving these biotech companies - stop the money and you will stop them. (Shareholders will demand reform to get your money flowing again) 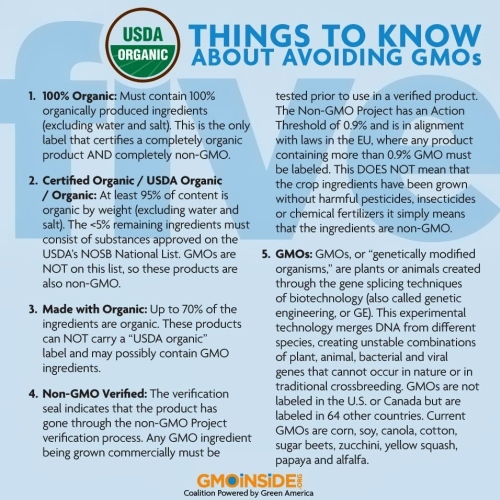 Peer-reviewed studies have found harmful effects on the health of laboratory and livestock animals fed GM food. Tests done on rats, monkeys, mice and livestock have all shown physical damage to their bodies from GM foods and their associated biocides - your human body is no different to these animals.

Because there have been no GM food tests on humans, test data does not exist and right now, you are the experiment. If enough people get sick and / or die, Governments will react to restrict or ban GM foods. (This is how it worked with DDT and GMO's will be no different)

If you would like to inform yourself on a more detailed level that includes scientific studies and references, click here to download the GMO Myth's and Truth's from Earth Open Source.

GMO (Back to Top)