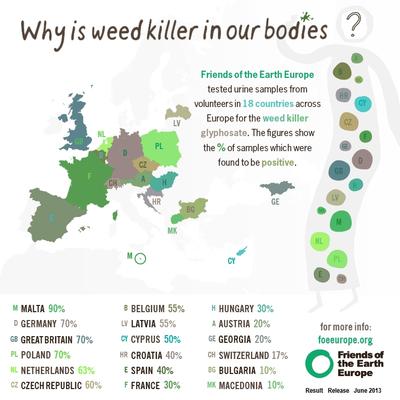 The top 5 European countries for families to have the best chance of producing herbicide modified "Frankenkids" courtesy of glyphosate produced by a few companies, such as Monsanto, are :

Your "Frankenkids" also include higher chances for yourself to produce a tumour or two from the same chemical.
Ironically, the European Commissioner responsible for Health and Consumer Policy in Europe, is from Malta.
He also happens to be the same person that is reviewing (in June 2013) Monsanto's application for SmartStax.
SmartStax is a patented GMO product with extra toxins and seed management to help reduce the risk of insects developing resistance to Monsanto's B.t. technology. This product is rumoured for imminent approval by the European Commission.
It is well documented that the additional use of GMO seed technology leads to higher use of glyphosate.
Glyphosate is the most commonly used herbicide on UK's agricultural farms and is used on 39% of agricultural land in Germany.

How the Tests were Done
To produce this statistic, Friends of the Earth Europe took urine samples from volunteers in Austria, Belgium, Bulgaria, Croatia, Cyprus, Czech Republic, France, Georgia, Germany, Hungary, Latvia, Macedonia, Malta, Poland, Spain, Switzerland, The Netherlands, and the UK.
A total of 80/182 samples tested were found to contain glyphosate. Volunteers were all city-dwellers and included vegetarian and nonvegetarian diets.
No two samples were tested from the same household and the samples were analysed by Dr Hoppe at Medical Laboratory Bremen in Germany.

Glyphosate Testing and Use in Europe
Today, no humans in Europe are tested for glyphosate (by European authorities) and in addition, there are presently 14 new GM crops designed to be cultivated with glyphosate that are currently waiting for approval to be grown in Europe.
With new GM crop approvals, increased use of global glyphosate can reach as much as 800% (650 000 tons was already used globally in 2011)

Europe's Farm to Fork Policy and the Process of Desiccation
Desiccation involves spraying crops, such as oilseed rape, maize, sunflowers and cereal crops, with glyphosate just before harvesting (about 1 to 2 weeks) which makes the crops dry out. This makes the crop easier to manage, such as, harvesting in wet seasons, earlier harvest, etc. This practice is used on GM and non GM crops.

Animal tests show that up to 30% of glyphosate is absorbed into the body. A week later, there is still about 1% remaining.


Glyphosate Approval in Europe
Glyphosate was approved for use in the EU in 2002 without peer reviewed science and the original data used to approve glyphosate is not available for independent study.
In 2012, the approval had to be renewed but Monsanto applied for an extension because their application was not ready. An extension has been granted until 2015 so that Monsanto can properly prepare its application.

Glyphosate Tolerances in Humans
- Allowed glyphosate amounts are 0.3 mg / kg of body weight
- Some manufacturers recommend between 0.05 and 0.15 mg / kg
- Independent reviews suggest allowed amount should be 0.025 mg / kg
This data shows that independent reviews suggest an allowed limit that is 12 TIMES LESS than the present "acceptable" allowed limit

What is the future for Europeans Contaminated with Glyphosate
Glyphosate is toxic to humans, animals and the entire environment. It is not specific and contaminates everything.
It is highly toxic and the European Commission better be very sure that they know what they are doing to prevent a human and environmental catastrophe in the very near future.
Dozens of tests and studies point to sick and dead people, sick and dead animals and a sick and dead environment.
Surely, the economic impact of banning glyphosate cannot be worse than poisoned people and a poisoned environment.

European alarm systems, such as the Rapid Alert System for Food and Feed (RASFF), are unable to react to poisoning caused by glyphosate because the symptoms are not immediately evident.
And because the glyphosate impact is not immediately obvious, present information points to more long term, wide ranging and intensive studies.
Europe should consider an immediate ban on glyphosate until tests are done and it is proved to the European public that glyphosate is safe to use, in all global aspects (and there are independent peer reviewed test results to prove it)
Unless you have given the European Commission explicit permission to allow herbicides, such as glyphosate, into your body, then it should not be there, within "acceptable" limits or not. A licence to poison has never been granted by the European public.

Europeans used to feel safe with the fact that Europe adopts the Precautionary Principle but we are not so sure that this policy applies to glyphosate and, people like myself, don't know why.
90% of the tests from Malta were positive for glyphosate - this cannot be a good thing and the people of Malta should be very concerned because glyphosate contamination will eventually kill you.

Maybe Mr Tonio Borg (European Commissioner for Health and Consumer Policy) can explain to his fellow countrymen and European neighbours why the people of Malta were measured to have the most (percentage wise) glyphosate herbicide toxin in their urine, out of 18 European countries.

Because the direct use of glyphosate is so widespread in the European food chain, European agriculture and European food imports, nobody has any idea of the amount of residues that Europeans are accumulating from all these inputs. "Acceptable" limits in humans cannot be controlled because there are now so many sources for glyphosate to enter the body.

More and more Europeans are getting sick and tired of scientists and Governments that are unable to look further than a test tube. Due to its increasing widespread use, glyphosate is slowly saturating European society with residual amounts because the people and the ecosystem are unable to dispose of it quickly enough.

Until European legislation is able to properly control glyphosate residuals that enter our bodies, reduce and try to eliminate this chemical altogether by buying non glyphosate foods produced by certified organic farmers - buy only from the farms and from the organic markets. Move away from the mainstream food chains unless you are happy to consume "acceptable" levels of residual glyphosate.

Read how you can reduce herbicicide residues by eating organic food.

The full glyphosate test report, from the medical laboratory, can be downloaded here.